During the first weekend of February, FOSDEM took place in Brussels, Belgium. It's a free, annual, two-day conference for open-source developers.

Outreachy interns receive some extra budget to attend events related to the open-source community, and I happily grabbed the opportunity to take a trip.

You don't have to register for the event, which means there are swarms of people pouring to the ULB (Brussels University) campus on both days of the conference. There are numerous talks grouped into tracks and held in multiple rooms inside several buildings, which makes getting around a bit inefficient for a newcomer/first-time visitor.

There were a lot of overlapping tracks and talks I wanted to attend, so it was hard to choose, but I made my personal schedule—which turned out to be more of a wishlist. Except for the largest lecture room, it was pretty hard to get to quite a few talks I selected; apparently, a lot of (well, too many) people had a taste similar to mine. In the end, I did catch several talks that I found quite interesting; about software freedom and its future, Tor project and online privacy, localization, Go, and different F(L)OSS community experiences. I also had plans to go see PHP & Friends, take a peek in Rust devroom and find out (more) about containers and DNS, but time did, unfortunately, not allow all that.

I also saw some interesting lightning talks; about a woman's experience in an open-source community→ (there was a very inspiring contrast between her "before" and "after"), about an initiative to transcribe sheet music into an open-source format→, about a libre strategy game→ (which I already installed and am eager to start playing).

I was very happy to have met Eva, another Outreachy intern and a fellow Slovenian, whose talk I especially liked. She presented her work on perf-html and website accessibility→ with a lot of confidence and great enthusiasm.

Between walking from room to room and drinking delicious Belgian Trappist beers, I also visited the stands where I grabbed some stickers and leaflets. I stopped by Software Freedom Conservancy to meet my "bosses" and say hi, I greeted GNOMErs and inquired about this year's GUADEC, and also contributed my voice to Slovenian dataset of Mozilla's Common Voice (this is very fun and I'm already adding more recordings, go check it out!). 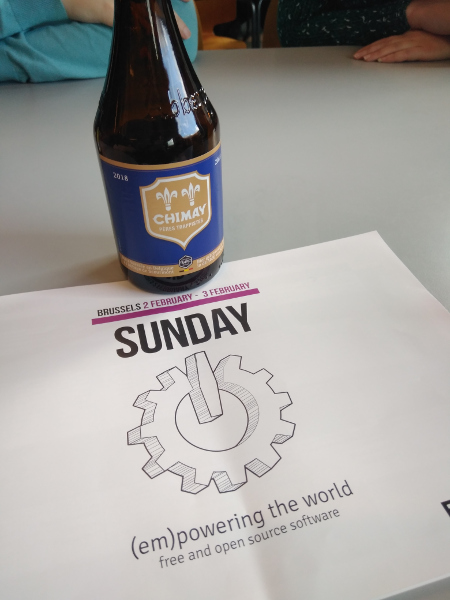 Another highlight was meeting fellow Outreachy interns Slavica and Lenka. We exchanged our experience and agreed on how attached we became to our projects; they are "our babies" now, and all of us want to continue working on them after our internships end—which is probably one of the main points of the program :). We also briefly met Laura, enough to say hi and take a selfie.

Sadly, I didn't catch Sage's talk about supporting people with impostor syndrome→ on Sunday, but it was the first one I watched online later (all talks were streamed live as well as recorded and uploaded on FOSDEM website). They spoke about the challenges of (new) members who have difficulty acknowledging their accomplishments or even being a "real" contributor, and how to help them overcome this. The myth that most stuck with me is "Everything is effortless for everyone else" as it resonates with my perception and struggles to a great extent—and which I am trying to abandon.

To summarize, it was awesome, albeit a bit crowded, experience seeing all those people that share my affinity for open source. I learned about several new projects and communities, so I have a lot of new material to read and watch, maybe I will even become part of them and make some contributions. The whole event, particularly on Sunday when the weather was a lot nicer, felt like a music festival: relaxed, happy and belonging to a community of people that you know like the same stuff you do.